It would appear so. Both governments are “concerned” about foreign-financed NGOs fomenting sedition in their countries. Really? If they are concerned, why do they permit American-financed organizations operating against them to exist?
https://www.globalresearch.ca/us-now-admits-funding-occupy-central-hong-kong/5405680
US Now Admits it is Funding “OccupyCentral” in Hong Kong
By Tony Cartalucci
Global Research, August 22, 2019
Land Destroyer Report and Global Research 1 October 2014
Region: Asia, USA
Theme: Intelligence

This article first published almost five years ago on October 1, 2014 is of particular relevance to an understanding of recent developments in Hong Kong.
***
Just as the US admitted shortly after the so-called “Arab Spring” began spreading chaos across the Middle East that it had fully funded, trained, and equipped both mob leaders and heavily armed terrorists years in advance, it is now admitted that the US State Department through a myriad of organizations and NGOs is behind the so-called “Occupy Central” protests in Hong Kong.
The Washington Post would report in an article titled, “Hong Kong erupts even as China tightens screws on civil society,” that:
Chinese leaders unnerved by protests elsewhere this year have been steadily tightening controls over civic organizations on the mainland suspected of carrying out the work of foreign powers.


The campaign aims to insulate China from subversive Western ideas such as democracy and freedom of expression, and from the influence, specifically, of U.S. groups that may be trying to promote those values here, experts say. That campaign is long-standing, but it has been prosecuted with renewed vigor under President Xi Jinping, especially after the overthrow of Ukrainian President Viktor Yanukovych following months of street demonstrations in Kiev that were viewed here as explicitly backed by the West.
The Washington Post would also report (emphasis added):
One foreign policy expert, who spoke on the condition of anonymity to discuss a sensitive subject, said Putin had called Xi to share his concern about the West’s role in Ukraine. Those concerns appear to have filtered down into conversations held over cups of tea in China, according to civil society group members.
“They are very concerned about Color Revolutions, they are very concerned about what is going on in Ukraine,” said the international NGO manager, whose organization is partly financed by the National Endowment for Democracy (NED), blamed here for supporting the protests in Kiev’s central Maidan square. “They say, ‘Your money is coming from the same people. Clearly you want to overthrow China.’ ”
Congressionally funded with the explicit goal of promoting democracy abroad, NED has long been viewed with suspicion or hostility by the authorities here. But the net of suspicion has widened to encompass such U.S. groups as the Ford Foundation, the International Republican Institute, the Carter Center and the Asia Foundation.
Of course, NED and its many subsidiaries including the International Republican Institute and the National Democratic Institute do no such thing as “promoting democracy,” and instead are in the business of constructing a global network of neo-imperial administration termed “civil society” that interlocks with the West’s many so-called “international institutions” which in turn  are completely controlled by interests in Washington, upon Wall Street, and in the cities of London and Brussels.
US Sponsored “Color Revolution” Struggles in Hong Kong 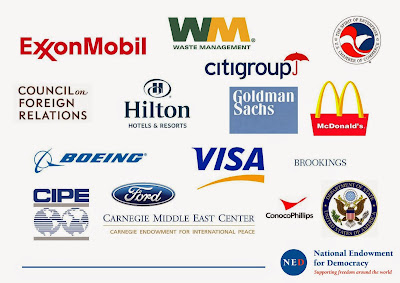 The very concept of the United States “promoting democracy” is scandalous when considering it is embroiled in an invasive global surveillance scandal, guilty of persecuting one unpopular war after another around the planet against the will of its own people and based on verified lies, and brutalizing and abusing its own citizens at home with militarized police cracking down on civilians in towns like Ferguson, Missouri – making China’s police actions against “Occupy Central” protesters pale in comparison. “Promoting democracy” is clearly cover for simply expanding its hegemonic agenda far beyond its borders and at the expense of national sovereignty for all subjected to it, including Americans themselves.
In 2011, similar revelations were made public of the US’ meddling in the so-called “Arab Spring” when the New York Times would report in an article titled, “U.S. Groups Helped Nurture Arab Uprisings,” that:
A number of the groups and individuals directly involved in the revolts and reforms sweeping the region, including the April 6 Youth Movement in Egypt, the Bahrain Center for Human Rights and grass-roots activists like Entsar Qadhi, a youth leader in Yemen, received training and financing from groups like the International Republican Institute, the National Democratic Institute and Freedom House, a nonprofit human rights organization based in Washington.
The article would also add, regarding NED specifically, that:
The Republican and Democratic institutes are loosely affiliated with the Republican and Democratic Parties. They were created by Congress and are financed through the National Endowment for Democracy, which was set up in 1983 to channel grants for promoting democracy in developing nations. The National Endowment receives about $100 million annually from Congress. Freedom House also gets the bulk of its money from the American government, mainly from the State Department. 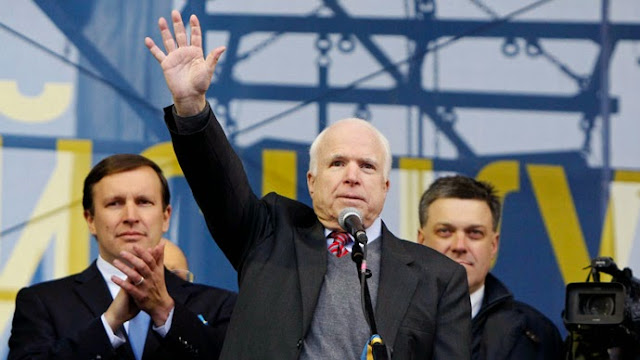 Pro-war and interventionist US Senator John McCain had famously taunted both Russia’s President Vladimir Putin and President Xi Jinping’s predecessor in 2011 that the US subversion sweeping the Middle East was soon headed toward Moscow and Beijing. The Atlantic in a 2011 article titled, “The Arab Spring: ‘A Virus That Will Attack Moscow and Beijing’,” would report that:
He [McCain] said, “A year ago, Ben-Ali and Gaddafi were not in power. Assad won’t be in power this time next year. This Arab Spring is a virus that will attack Moscow and Beijing.” McCain then walked off the stage.
Considering the overt foreign-funded nature of not only the “Arab Spring,” but now “Occupy Central,” and considering the chaos, death, destabilization, and collapse suffered by victims of previous US subversion, “Occupy Central” can be painted in a new light – a mob of dupes being used to destroy their own home – all while abusing the principles of “democracy” behind which is couched an insidious, diametrically opposed foreign imposed tyranny driven by immense, global spanning corporate-financier interests that fear and actively destroy competition. In particular, this global hegemon seeks to suppress the reemergence of Russia as a global power, and prevent the rise of China itself upon the world’s stage.
The regressive agenda of “Occupy Central’s” US-backed leadership, and their shameless exploitation of the good intentions of the many young people ensnared by their gimmicks, poses a threat in reality every bit as dangerous as the “threat” they claim Beijing poses to the island of Hong Kong and its people. Hopefully the people of China, and the many people around the world looking on as “Occupy Central” unfolds, will realize this foreign-driven gambit and stop it before it exacts the heavy toll it has on nations that have fallen victim to it before – Libya, Syria, Ukraine, Egypt, and many others.
*
Note to readers: please click the share buttons above or below. Forward this article to your email lists. Crosspost on your blog site, internet forums. etc.
The original source of this article is Land Destroyer Report and Global Research
Copyright © Tony Cartalucci, Land Destroyer Report and Global Research, 2019