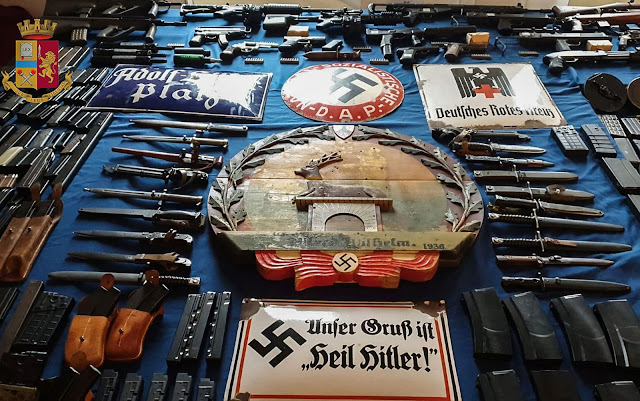 Inquiries are under way about the modern arsenals discovered in Piedmont, Lombardy and Tuscany - a veritable neo-Nazi matrix, as revealed by the swastikas and Hitler quotes found with the weapons. However, there is still no answer to the question – is this a trove of Nazi nostalgia, the cache of an arms collector, or are we looking at something far more dangerous?
The investigators – according to the  Corriere della Sera – have been looking at «right-wing extremists close to the Azov Battalion», but have so far discovered «nothing useful». And yet for years we have seen ample and documented proof of the role of this armed Ukrainian formation, and others, composed of trained neo-Nazis who were used in the Place Maïdan putsch in 2014, under the orders of the USA/NATO, and in the attack on Ukrainian Russians in the Donbass.
We should point out that the Azov is no longer a military-style battalion (as defined by the  Corriere), but has been transformed into a regiment, in other words a regular higher-level military unit. The Azov Battalion was founded in May 2014 by Andriy Biletsky, known as the «White Führer», as a support force for the «racial purity of the Ukrainian nation, to prevent its genes being mixed with those of inferior races», thus ensuring «its historic mission to lead the world's White Race in its final crusade for survival».
Biletsky recruited neo-Nazi militants for the Azov Battalion who were already under his orders as head of special operations in the Pravy Sektor (Right Sector). The Azov immediately distinguished itself by its ferocity in the attacks against the Russian population of Ukraine, particularly in Mariupol.
In October 2014, the  Battalion was incorporated into the National Guard, run by the Minister of the Interior, and Biletsky was promoted to colonel and decorated with the « Order for Personal Courage ». Withdrawn from the Donbass, the Azov was transformed into a regiment of special forces, equipped with tanks and artillery from the 30th Mechanised Brigade. What it retained in this transformation was the emblem, copied from that of the SS Das Reich, and the ideological training of troops based on the Nazi model.
As a unit of the National Guard, the Azov regiment was trained by US instructors and others from NATO. We read in an official text - «In October 2018, representatives of the Italian Carabinieri visited the Ukrainian National Guard to discuss the expansion of cooperation in various sectors, and to sign an agreement on bilateral cooperation between the institutions». In February 2019, the Azov regiment was deployed on the front line in Donbass.
Azov is not only a military unit, but an ideological and political movement. Biletsky, who had created his own party «National Corps» in October 2016 – remains the charismatic leader, particularly for the organisation of the youth, which is indoctrinated by his book «The Words of the White Führer» in the hatred of Russians, and who receive military training.At the same time, Azov, Pravy Sektor and other Ukrainian organisations recruit neo-Nazis from all over Europe (including Italy) and the USA.
After they have been trained and tested in military actions against the Russians in the Donbass, they are sent home, obviously maintaining their links with the recruiting and training centres.
This is happening in Ukraine, a partner country of NATO, already a member, under close command of the USA.


Ø  We can therefore understand why the inquiries about the neo-Nazi arsenals in Italy will be unable to reach a conclusion.
Ø  We can also understand why those people who talk ceaselessly about anti-fascism remain silent about the rebirth of Nazism in the heart of Europe.
il manifesto, 23 July 2019
Tanslator : Pete Kimbereley