The F-35's were part of Pompeo's secret agenda in Rome

The sale of F-35's was on the menu of Mike Pompeo's journey to Italy, although officially the subject was of no great importance. Identically, although officially his journey to the Vatican concerned only theological questions, in reality it concerned the mobilisation of the Holy See against China, Cuba, Iran and Syria.
Voltaire Network| Rome (Italy) | 8 October 2019 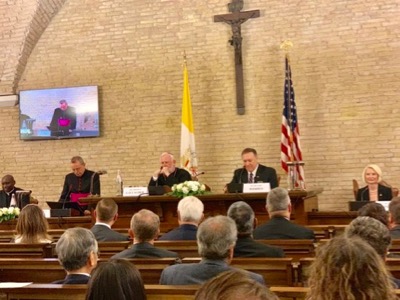 Mike Pompeo, at the Vatican symposium on 1 October 2019, delivers a communication on « Human dignity and faith in free societies ».

The F-35 stealth fighter is able to hide not only from radar, but also from politics – there is no trace of it at all in reports of US Secretary of State Mike Pompeo's meetings in Rome. However, the Corriere della Sera reveals that Pompeo asked Italy to pay the arrears on the fighters already obtained and to unblock the orders for future sales, receiving from Prime Minister Giuseppe Conte the assurance that « we will remain faithful to our agreements ».
To date, Italy has bought fourteen F-35 fighters from the US company Lockheed Martin, of which thirteen, already delivered, are « completely financed ». This was specified to the Senate on 3 June by the Minister for Defence of that time, Elisabetta Trenta (M5S), who announced further sales which would bring the total number of aircraft to twenty-eight by the year 2022. Italy has agreed to buy ninety F-35's for an estimated sum of about 14 billion Euros. To this expense we have to add the cost of the continual up-dating of the fighter's software (all operational programmes) for which Lockheed Martin has the exclusivity. Counting only the programmes for the fighters that have been purchased so far, Italy must already spend approximately half a billion Euros. Italy is not only the buyer, but also the builder of the F-35, as a second-level partner. The company Leonardo (ex-Finmeccanica) - the most important major Italian military industry, of which the Ministry of Economy and Finance is the only shareholder, with a percentage of about 30% - manages the assembly line and tests the F-35's on the site at Faco di Cameri (Piedmont), the source of the fighters intended for Italy and the Netherlands.
Leonardo also produces complete wing structures for the aircraft that have been assembled in the USA, using materials produced in establishments at Foggia (Puglia), Nola (Campania) and Venegono (Lombardy). The US government has selected the establishment at Cameri as the European regional centre for the maintenace and updating of the fuselage.
Jobs at the Faco factory number about a thousand, of which many are precarious, a total of approximately one sixth of those planned. The cost of the construction of the establishments and the purchase of the fighters is far superior to the sum mentioned in the contracts stipulated by Italian companies for the production of the F-35's - and we must not forget that while the profits go almost exclusively into the coffers of private companies, the money is taken from the public budget, which swells Italian military expenditure to today's cost of 70 million Euros per day.
Secretary of State Mike Pompeo, in his meetings with President Mattarella and Prime Minister  Conte, emphasised the necessity for Italy and other European countries to « increase their investments in NATO's collective defence programme ». Without a doubt, in private meetings, this request was made by Pompeo not in a diplomatic manner, but rather that of an order. Without a doubt, while the State Department flatters Italy for having « welcomed more than 30,000 military personnel and Pentagon workers in five major bases and more than fifty minor installations », Mike Pompeo would have demanded, in private meetings, the installation in Italy of other military bases (perhaps in exchange for some US tax relief on Italian Parmesan).
Without a doubt, in Pompeo' secret agenda, there was also the preparation for the impending arrival in Italy of the new US B61-12 nuclear bombs, which will replace the present B-61's.
New nuclear weapons, planned in particular for the F-35A fighter-bombers, including six belonging to Italian  Aeronaval, were validated in October by NATO as being fully operational.
Mike Pompeo did not only take care of material matters in Rome, like the F-35 and Parmesan. In a Vatican symposium on 1 October, he delivered a sermon on Human Dignity and Faith in Free Societies [1] : he stated that « the United States arrived a little later than Saint Peter, but since we've been here, we have always protected religious freedom » and, with that, « human dignity ». He accused China, Cuba, Iran and Syria of stifling this liberty. These words were spoken in front of a large cross, by a holy man who, when he became the head of the CIA, declared to Congress that he intended to consider « the reintroduction of waterboarding (a near-death by drowning technique) and other measures of extreme interrogation », in other words, torture.
Manlio Dinucci
Translation
Pete Kimberley
Source Il Manifesto (Italie)