Paul Craig Roberts – Putin And The Russians Crushing The U.S. As The West Destroys Itself

The U.S. As The West Destroys Itself

On the heels of the Chinese stock market plunging 5.5 percent, continued turmoil in the Middle East and the price of gold hitting 5 year lows, today former U.S. Treasury official, Dr. Paul Craig Roberts told King World News that Putin and the Russians are now dominating in Syria and the Middle East as the West destroys itself.

Dr. Paul Craig Roberts:  “It could well be that this is going to work out so much in Russia’s favor that Putin will send a letter of thanks to the Turkish President and say, ‘Thank you very much.  You’ve done us a huge favor. (Laughter).  We lost a pilot and a naval marine but we sure have gained a lot.  That was only two deaths for winning a war.”…

Paul Craig Roberts continues:  “So that looks to me like the most likely outcome.  The unintended consequence of this are so positive for Russia that it’s got Washington quaking and Europe wondering about the idiocy of being in NATO.”

Eric King:  “What I’m hearing from you Russia is dominating in Syria.  The Russians have completely taken over and there’s really nothing Washington can do.”

Paul Craig Roberts:  “No, except make a fool of itself by supporting ISIS.  We brought ISIS in there (to Syria) — everybody knows that.  Just the other day the former head the Pentagon’s Defense Intelligence Agency said on television that ‘Yes, we created ISIS and we used them as henchmen to overthrow governments.’ (Laughter).

And the polls in Europe show that the people are on Russia’s side regarding the shooting down of their aircraft.  They don’t believe (the West’s) story at all.  So I think what you are seeing here is the arrogance, hubris, and stupidity of the United States government.  They are just handing every possible advantage over to the Russians.

This is all because those Europeans were stupid enough to enable our wars.  Now the political parties in Europe are under tremendous pressure from these refugees and the populations who object to them, and from the rising dissident parties who are saying, ‘Look at what these people who you trusted have done.  They’ve changed your country.  It’s not Germany anymore — it’s Syria.’ (Laughter).

This is a disaster.  Only the stupid Americans could have produced such a disaster. Does Putin need to do anything?  We’re doing it all for him.  So he doesn’t need to do anything.  He’s not going to attack anybody.  What does he need to attack anybody for?  The idiot Americans are destroying themselves and their allies.  This is an amazing fiasco.” 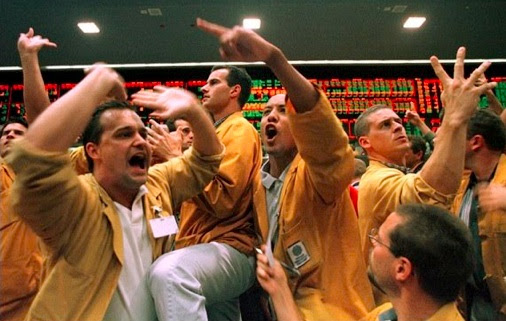 Eric King:  “Dr. Roberts, people are worried about World War III breaking out and yet we have the price of gold today hitting 5 1/2 year lows.  So I guess even though Washington has lost control in the Middle East, they still feel like they have to keep up appearances.”

Paul Craig Roberts:  “Gold didn’t hit a low, it was artificially driven down by the bullion banks, who are agents of the Federal Reserve and acting on the Fed’s orders.  This is the way the Fed protects the dollar from losing value.  This has been going on in earnest since the fall of 2011.  We see the appearance at the most odd times of day and night, for no reason whatsoever, of massive short sale of paper contracts that cause the price of gold to move straight down.”

Eric King:  “We saw that today in the gold market with roughly $2 billion of paper gold being sold into the market almost instantaneously.”

Paul Craig Roberts:  “But it doesn’t mean anything about the value of gold.  It simply means that the Federal Reserve and the bullion banks have manipulated the market.  So that’s what’s going on.  This is the worst kind of criminality and the worst kind of corruption.  I, myself, wrote to the Commodity Futures Trading  Commission and asked them why they permitted this?  This is a violation of the law.  But nothing can be done because it’s the government that’s doing it and the government is not going to prosecute itself.

So never say gold hit a new low because it didn’t.  It got driven down artificially by a corrupt government…

To continue listening to one of the most extraordinary interviews ever with Dr. Paul Craig Roberts that has now been released CLICK HERE OR ON THE IMAGE BELOW.

***ALSO JUST RELEASED:  The World Is Now On The Edge Of Massive Financial Destruction And Total Chaos CLICK HERE.

Dr. Paul Craig Roberts was Assistant Secretary of the Treasury for Economic Policy and associate editor of the Wall Street Journal. He was columnist for Business Week, Scripps Howard News Service, and Creators Syndicate. He has had many university appointments. His internet columns have attracted a worldwide following. Roberts' latest books areThe Failure of Laissez Faire Capitalism and Economic Dissolution of the West
Posted by MICAS at 9:52 AM

Email ThisBlogThis!Share to TwitterShare to FacebookShare to Pinterest
Labels: INTERVIEW