Putin Politely Tells Megyn Kelly That She Is A Dumbass

Putin Politely Tells Megyn Kelly That She Is A Dumbass
June 5, 2017 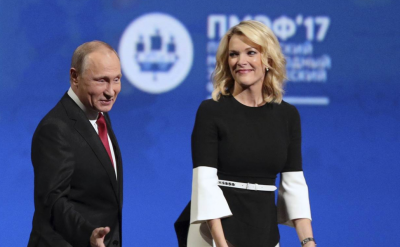 Putin and Kelly in St. Petersburg. Quality entertainment.
Have you heard? Megyn Kelly left Fox News, and now she's a muckraking foreign correspondent for NBC.
As the moderator of the panel discussion at the 21st St. Petersburg International Economic Forum, Kelly has already spent an exorbitant amount of time asking Putin how many DNC emails he hacked for breakfast this morning.
Putin is a patient man. But everyone has limits.
This just happened:
Kelly: What they say, in response to the question 'where is the proof [of Russia meddling in US elections]?', is that this type of disinformation campaign is intentionally difficult to find hardcore proof of. It's other factors—and what the experts say is that this couldn't have been faked. That it's not one factor that it's 100 factors that point to Russia. They say it's the forensics, it's the digital fingerprints, it's the IP addresses, the malware, the encryption keys, the specific pieces of code—that all of them, all of them point to Russia, and none of them points to anyone other than Russia.
Putin: What fingerprints? Or whose prints? What are you talking about? IP addresses can be invented. You know, there are many specialists that can invent them. They could make it look as if your three-year-old girl perpetrated such an attack. They can invent anything. And then they will blame someone else.
It's nice that Putin knows that Megyn Kelly has a daughter. Shows he really cares, doesn't it?
A final thought
Why is Russia so generous to stupid US television personalities? The idea that having Megyn Kelly moderate would somehow "bridge the divide" between the US and Russia is just silly. You would need someone thoughtful to do that.
Our honest advice to the Kremlin: Stop wasting time and money on these people, and pave a few roads.
Better return-on-investment.