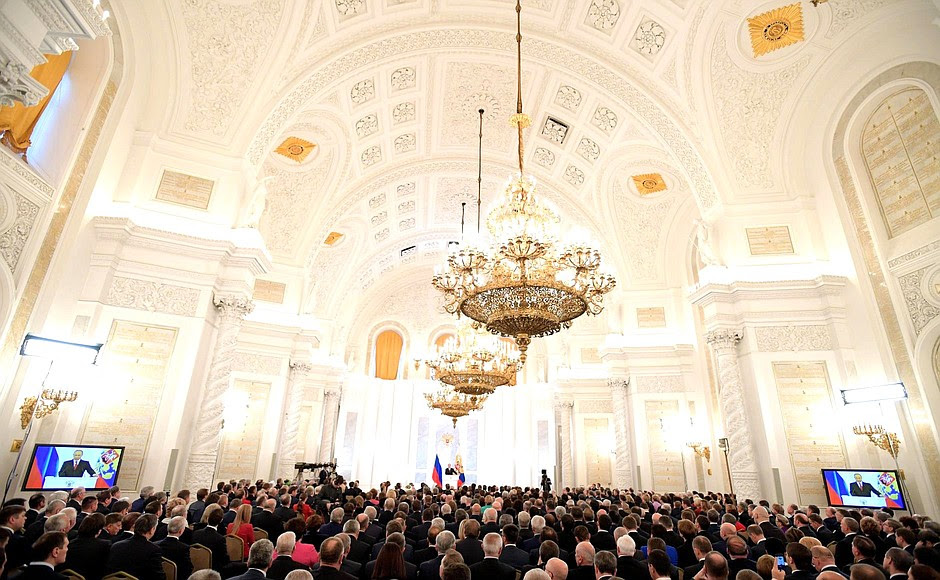 MOSCOW (Sputnik) — Russian President Vladimir Putin on Thursday spoke about domestic and foreign affairs, the consequences of the global financial crisis and sanctions, international cooperation and the prospects for various economy sectors in his annual State of the Nation Address to the Federal Assembly.

On Pivot to the East

"I will again stress that Russia's active eastern policy is not driven by some kind of temporary opportunistic considerations and not by the cooling of relations with the United States and the European Union, but by long-term national interests and tendencies in global development." "We expect a high-quality progress with regard to relations with our eastern neighbor, Japan. We welcome the aspiration of the state’s government to develop economic ties with Russia, to launch joint projects and programs."

"It [the Russian-Chinese cooperation] serves as a perfect example of the relations built on harmonious consideration of the interests of every state, rather than on the idea of one part’s domination, no matter how powerful it is."

"We hope to join efforts with the United States in the struggle against real, and not imaginary threat. With international terrorism."

"Russia is ready to cooperate with the new US Administration, it is important to normalize and develop bilateral relations on an equal and mutually beneficial basis. Cooperation between Russia and the United States in addressing global and regional issues is in the interest of the whole world. We share responsibility for ensuring international security and stability."

On Cooperation With EU

"Russia's idea of forming a multilevel integration model in Eurasia, a large-scale Eurasian partnership, is very interesting. We have begun discussing it on international and regional levels. I am sure, this discussion is possible with the EU countries in which the demand is now growing for the independent political and economical directions. We see this in the results of the elections."

"[We are] committed to the friendly, equal dialogue, to upholding the principles of justice and mutual respect in international affairs, [we are] ready to the serious conversation on building a stable system of international relations of the 21st century. Unfortunately, in this context, the decades that passed after the end of the Cold War were lost in vain."

"We are always criticized that we allegedly introduce censorship in the country, now they [Western countries] are practicing in this area themselves."

"I would like to emphasize that attempts to break the strategic parity [regarding nuclear armaments] are extremely dangerous and can lead to global catastrophe. One cannot forget about it for a minute."

Dr. Paul Craig Roberts was Assistant Secretary of the Treasury for Economic Policy and associate editor of the Wall Street Journal. He was columnist for Business Week, Scripps Howard News Service, and Creators Syndicate. He has had many university appointments. His internet columns have attracted a worldwide following. Roberts' latest books are The Failure of Laissez Faire Capitalism and Economic Dissolution of the West,

Posted by luisavasconcellos2012@gmail.com at 2:39 PM