The manufacturer of one of the weapons used in the alleged ISIS Paris attack reports that the weapon was sold by the factory to a US arms dealer. The American arms dealer has close connection to the CIA.
http://www.globalresearch.ca/weapon-used-in-november-13-paris-attacks-came-from-cia-linked-arms-dealer/5496747 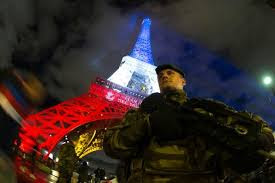 At least one of the guns used in the November 13 terror attacks in Paris was purchased by Century International Arms and then re-exported to Europe. One of the largest arms dealers in the United States, Century Arms has close ties to the CIA and has faced charges in America and Europe of involvement in illegal arms deals.

The weapon, an M92 semiautomatic pistol, was produced at the Zastava arms factory in Kragujevac, Serbia. Last week, factory manager Milojko Brzakovic told AP he had checked its records on seven weapons that it manufactured that were used in the Paris attacks. It delivered several of the weapons inside Yugoslavia before that country dissolved amid capitalist restoration and civil war in the 1990s, but it delivered the pistol in May 2013 to Century Arms, based in Delray Beach, Florida.

Century Arms officials refused Palm Beach Post reporters’ requests for comment, and it remains unclear how the M92 pistol was re-exported to Europe. Century Arms required US government approval to legally import the firearm into the United States, however, and whoever re-exported it to Europe would have had to submit a request to the US State Department in order to do so legally.

These reports further undermine the official presentation of the Paris attacks by governments, media, and pro-imperialist “left” parties. They insisted that the attacks were an act of Islamist terror in which the Islamic State in Iraq and Syria (ISIS) alone was involved and bore full responsibility.

This presentation was always a political fraud, insofar as the NATO powers were undoubtedly politically implicated. The attacks were led by Islamist fighters trained in Syria—where the CIA, European intelligence and Persian Gulf oil sheikdoms have given financial and military backing to such Islamist forces to topple President Bashar al-Assad. Though placed on watch lists and monitored by intelligence services, these fighters were somehow allowed to prepare highly complex, coordinated attacks in Paris.

Revelations of a concrete link between Century Arms and the Paris attacks, however, raise specifically whether elements in the intelligence services aided the attackers—either inadvertently, due to their reckless war policy, or deliberately, to shift the political atmosphere far to the right.

The ruling elite reacted to the November 13 attacks, predictably, by aligning policy on war and democratic rights with the views of the most aggressive sections of the military-intelligence complex. France is now preparing to impose a permanent state of emergency, effectively abrogating key democratic rights and boosting the political fortunes of the neo-fascist National Front (FN). NATO is ramping up support to its proxies in Syria, though this threatens to trigger an all-out military clash with nuclear-armed Russia.

While it remains unclear how the Paris attacks were organized, the link to Century Arms strongly suggests that elements acting for the intelligence agencies, in an official capacity or otherwise, were involved. Century Arms has had close ties to US foreign policy for decades.

In 1987, John Rugg, a former police officer and Century Arms employee, testified to the US Senate that the firm had run weapons to the Contras fighting the Sandinista government in Nicaragua. This illegal operation, led by the CIA in defiance of the Boland Amendment passed by the US Congress cutting off aid to the Contras, had exploded in the Iran-Contra scandal.

In 2004, according to the Palm Beach Post, Italian authorities halted shipment of 7,500 AK-47 rifles to Century Arms from Romania, where the firm had developed commercial ties since before the restoration of capitalism in Eastern Europe.

In 2007, according to a US diplomatic cable published by WikiLeaks, Century Arms worked with Israeli arms dealer Ori Zeller to illegally recover and sell off American M-1 rifles shipped by Washington to the bloody Guatemalan regime during that country’s civil war. The cable also states that Zeller’s associates were convicted of money laundering in Belgium in 2003, and suspected of laundering $20 million in Al Qaeda funds via West African diamonds.

Nonetheless, the cable called Zeller a “valuable source for the USG [US government] in Guatemala.” It added that the US government used him to obtain information on Guatemala, Israel, Russian arms sales, and Mexican drug cartels.

Century Arms’ relationship with Mexican narco-traffickers apparently goes beyond providing information. The US Center for Public Integrity reported in 2011 that Romanian WASR-10 rifles sold by Century Arms had “become a favorite of the Mexican drug cartels, and in recent years hundreds of them have been traced to crimes in Mexico.”

This is not the first indication that connections existed between state forces and Islamist groups that carried out terror attacks in France.

On Wednesday, French police detained Claude Hermant, a former member of the FN’s security detail who is active in far-right circles in northern France and serves as an informant for police and customs officials, for questioning over the January attacks on Charlie Hebdo and the Hyper Cacher. Officials confirmed that he was being held for questioning as to whether he had trafficked weapons to Amedy Coulibaly, the gunman at the Hyper Cacher.

This confirmed earlier reports that Lille prosecutors were investigating a linkbetween Hermant and the January attacks. French Interior Minister Bernard Cazeneuve subsequently invoked the state secrets privilege in an attempt toblock the investigation. However, this decision and more details of the investigation of Hermant were leaked to the press.

The Lille investigation is now apparently considering the possibility that Hermant himself was simply playing the role of middleman in a larger network involved in arming the gunmen. Officials close to the investigating team told La Voix du Nord, “In such trafficking, there is always one intermediary, or more. Claude Hermant did not necessarily know the final destination of the weapons. It would show, in any case, the links between certain Islamist circles and organized crime.”

The paper also reported that a customs official had been placed under investigation in the Hermant affair.

The original source of this article is World Socialist Web Site